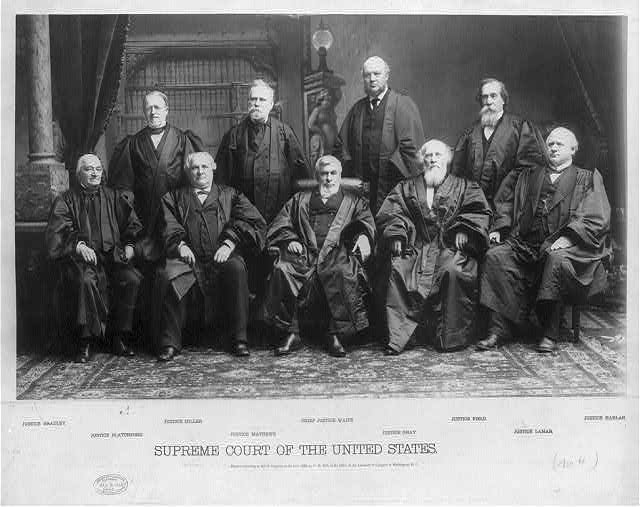 What rights the Post Roads Act in fact bestowed on telegraph companies, and how they should be properly classified, would be litigated over the next six decades.

All of these cases consider the Post Roads Act as authority for federal restraint on state authority. In analyzing the issues before the Court, the Court considers:

"It is a misconception, however, to suppose that the franchise or privilege granted by the act of 1866 carries with it the unrestricted right to appropriate the public property of a State. It is like any other franchise, to be exercised in subordination to public as to private rights... It never could have been intended by the Congress of the United States in conferring upon a corporation of one State the authority to enter the territory of any other State and erect its poles and lines therein, to establish the proposition that such a company owed no obedience to the laws of the State into which it thus entered, and was under no obligation to pay its fair proportion of the taxes necessary to its support." [St. Louis, 148 U.S. at 100]

Responding to Western Union's argument that railroads had morphed into "public highways" and that Western Union could therefore enter railroad land without restraint, the Court retorted "Counsel, in advancing the argument, exhibits a consciousness of taking an extreme position". [PA RR I, 195 U.S. at 573] [PA RR II, 195 U.S. at 597 ("they have carried the analogies between ordinary highways and railroads too far; indeed, have gone beyond analogy, and have contended for almost legal coincidence in attributes and effect.")] See also [Gottlieb, 190 U.S. at 425 ("Every one of the fundamental propositions, therefore, contended for by [Western Union, was] unsound.")] [Massachusetts, 125 U.S. at 549 ("It never could have been intended by the Congress of the United States, in conferring upon a corporation of one state the authority to enter the territory of any other state and erect its poles and lines therein, to establish the proposition that such a company owed no obedience to the laws of the state into which it thus entered, and was under no obligation to pay its fair proportion of the taxes necessary to its support.")]

Of the 20 Post Roads Act litigations* which reached the Supreme Court, telegraph company interests won five (25%) and lost 15 (75%) of the cases. In the first five years of Supreme Court cases, telegraph won 71% of the cases. After 1889, telegraph interests lost every case. Telegraph companies initially were successful on interstate commerce cases. Having learned their lesson from these and similar railroad cases, states were careful to have their jurisdiction end at the state border. After 1889, litigations generally involved telegraph companies seeking to avoid state taxes or oversight - and losing each round. Post Road Act Supreme Court cases were frequent for 35 years (with an odd outlier in 1928 concerning whether the Emergency Fleet Corp. qualified for the government telegraph rate under the Post Roads Act); thats an average of a case every two years.

Western Union had become the dominant telegraph company and this is reflected in who the stakeholders were in these litigations. Seventeen of the cases (85%) involved Western Union (or its officers or affiliates) as a party; two cases involved Postal Telegraph (a company which did not exist at the time the Post Roads Act was enacted), and one case involved a Bell Telephone company seeking to take advantage to the benefit of access to right of way bestowed by the Post Roads Act.

* Note that this is an analysis of Supreme Court cases that considered the Post Roads Act. It does not include any of the other litigations raised on other statutes or other grounds - such as the transcontinental acts or litigation considering common carrier obligations.

Both Western Union and Postal Telegraph repeatedly litigated issues previously resolved by the court. This was at a time when the court had less discretion in accepting appeals. The Court grew terse in its disposals of these reruns. In Alabama State Board of Assessments, the Court stated "The question on which the jurisdiction of this Court depends has been decided in this Court so frequently of late years, several of the decisions having been made since the judgment of the Supreme Court of Alabama was delivered, that but little remains to be said in the present case except to show that it comes within the principles of the cases referred to." Again, in Charleston, the court stated "The questions thus suggested have been so frequently and so recently considered and decided by this court, in well-known cases, that our duty will be sufficiently performed by briefly citing and applying those cases." Again, in Gottlieb, the Court remarked "We think the question has been answered by this court." Postal Telegraph repeatedly raised arguments that Western Union had already attempted, and got shot down. In Mackay Telegraph, the court stated the issue of state taxation "is so thoroughly settled by previous decisions of this court that no further discussion is called for." [Mackay, 250 U.S. at 99] The Judiciary Act of 1891 and the Judiciary Act of 1925 were both enacted to reduce the work load of the Supreme Court, reducing the number of cases that the Court mandatorily had to review. Litigations that constitute repetitions are noted below with Ý.

Why did the telegraph companies re-litigate issues they had already lost? Did they expect a miraculously different result from the Court? Or was the threat of perpetual litigation a negotiating tool used by the telegraph companies as leverage to extract terms from local governments who may have been less than inclined to bankroll litigation up to the Supreme Court on every dispute? One of the justifications for the creation of the FCC in 1934 was that AT&T as a national corporation was running roughshod over smaller government authorities; the creation of a federal expert agency was designed in part to match the size of AT&T Đ to counter the bullying of smaller local authorities by large corporations.

Postal Telegraph Co. v. City of Portland, 228 Fed. 254 (D.Or. 1915) ("The privilege granted by Congress under the Post Roads Act to use the military and post roads of the United States for the poles and wires of the company is permissive in character only, and is not to be regarded as creating corporate rights or privileges to carry on the business of telegraphy. Those rights and privileges are derived from the laws of the state under which the company is incorporated, and the state is not, by reason of the Post Roads Act, prevented from taxing the real or personal property belonging to the company within its borders, nor from imposing a license tax upon the right to do a local business within the state.") [City of Portland, 228 Fed. 254]