"The American Telephone and Telegraph Company is more powerful and skilled than any state government with which it has to deal." -Preliminary Report on Communication Companies, 73d Cong., H Rep No 1273 (1936) (Sam Rayburn)

Morse introduced Telegraph service in 1842; it quickly came to fall under the authority of a mixture of state jurisdiction, the Interstate Commerce Commission, and Post Office oversight. Bell introduced Telephone service in 1877; conceived as "voice telegraphy," offered over the essentially the same poles, wires, and right of way as telegraphy, and with telegraph service dominating communication service at the time, authority over telephone service followed the path of telegraph service. Guglelimo Marconi received, in 1897, a U.S. patent for radio; jurisdiction over radio as initially a maritime concern fell to the U.S. Navy and then to the Federal Radio Commission.

Government officials, however, wanted a strong expert agency (see "Chevron Doctrine") that could counter the size and power of AT&T, Western Union, and other communications firms with significant market power. State governments had become overwhelmed by the resources of AT&T. Having regulatory authority divided and spread out across various federal agencies made federal oversight weak and ineffective. Officials were unhappy with the Interstate Commerce Commission which had been tasked with oversight of telephone and telegraph services, but which was preoccupied with railroad regulation. [1934 Study at 7 ("[The ICC] already burdened with its great responsibilities on railroad regulation has never been very active in the regulation of communication agencies... [The ICC has] no departments, bureaus, or divisions that dealt exclusively with radio, telephone, telegraph, or cable matters, that few such cases had ever been heard by the Commission, and that there were no employees in any of the departments or bureaus who dealt exclusively with communication matters...")] [Brands p 4]

"President Franklin D. Roosevelt in 1933, requested the Secretary of Commerce appoint an interdepartmental committee for studying electronic communications. The Committee reported that "the communications service, as far as congressional action is involved, should be regulated by a single body." [1934 Study at 8] The Committee stated

Although the cable, telegraph, telephone, and radio are inextricably intertwined in communication, the Federal regulation of these agencies, in our country, is not centered in one governmental body. The responsibility for regulation is scattered. This scattering of the regulatory power of the Government has not been in the interest of the most economical or efficient service. 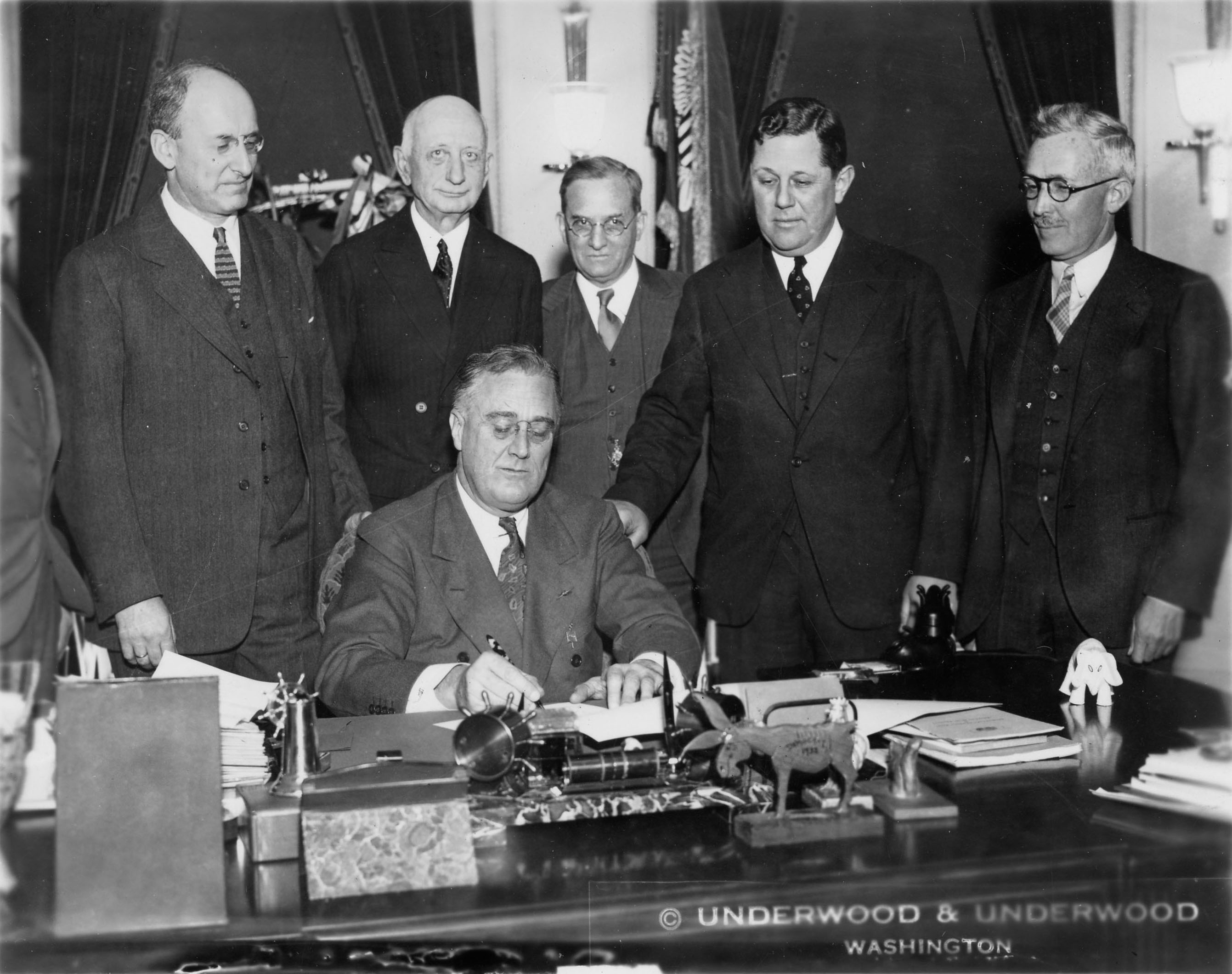 On February 26, 1934, the President sent a special message to Congress urging the creation of the Federal Communications Commission (FCC). The following day Senator Dill and Representative Sam Rayburn of Texas introduced bills to carry out this recommendation. The Senate Bill (S.3285) passed the House on June 1, 1934, and the conference report was adopted by both houses eight days later. The Communications Act was signed by President Roosevelt on June 1934. Particular parts of it became effective July 1, 1934; other parts on July 11, 1934. And thus the FCC was born.

The Federal Communications Commission assimilated from other preexisting agencies:

The Communications Act allowed the FCC additional authority, including regulation of rates of interstate and international common carriers, and domestic administration of international agreements relating generally to electronic communication. [Compare 78 Cong. Rec. 10,313 (1934) ("The bill as a whole does not change existing law, not only with reference to radio but with reference to telegraph, telephone, and cable, except in the transfer of jurisdiction [from the ICC to the FCC] and such minor amendments as to make that transfer effective.")]

The Communications Act of 1934, as amended, consists of six major "titles":

Derived From: From History of Wire and Broadcast Communication, FCC (May 1993)