Every "host" (computer) on the Internet requires an IP number in order to interact over the network. The current number space is IP version 4 (IPv4) and it [has run] out of numbers. In recognition of this limitation, in 1991, work was initiated on a next generation internet protocol. This work resulted in a new address space, IPv6 ("The name IPv5 had previously been allocated to an experimental stream protocol." [NIST Security 2010 p 2-1]). IPv6 dramatically increases the amount of IP address space available from the approximately 4.3 billion addresses in IPv4 to approximately 3.4 × 1038. Because IPv6 uses a 128-bit address scheme rather than the 32-bit address scheme used in IPv4, it is able to allow many more possible addresses. The increase in the actual bits in the address and the immense number of possible combinations of numbers make the dramatic number of unique addresses a possibility. Figure 4 shows the difference between the length of an IPv4 address and that of an IPv6 address.

The key benefits of IPv6 include

Some things that IPv6 does not do include eliminate NATs. [Bush Slide 11] NATs may serve as part of a transition solution. IPv6 also does not eliminate the need for CIDR. [COOK]

These key characteristics of IPv6 offer various enhancements relative to IPv4 and are expected to increase Internet services and enable advanced Internet communications that could foster new software applications for federal agencies. 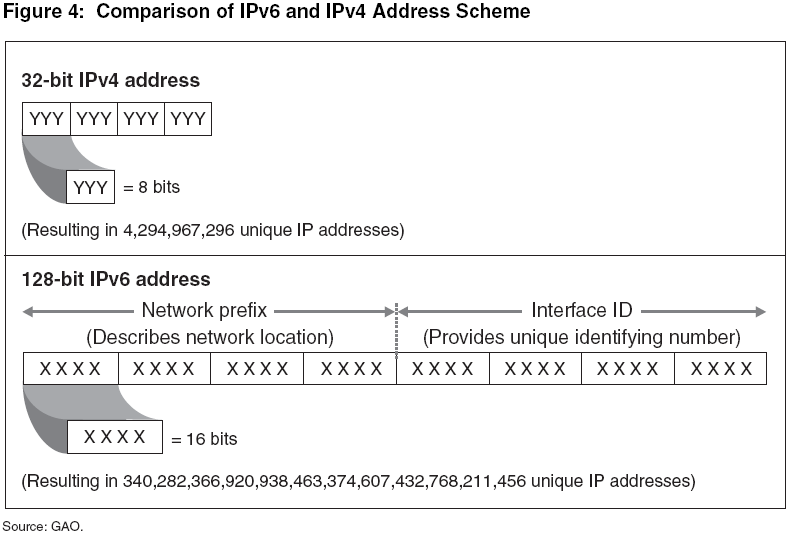 This large number of IPv6 addresses means that almost any electronic device can have its own address. While IP addresses are commonly associated with computers, they are increasingly being assigned to communications devices such as phones and other items such as consumer electronics and automobiles. -

IPv6 addresses are characterized by a network prefix that describes the location of an IPv6-capable device in a network and an interface ID that provides a unique identification number (ID) for the device. The network prefix will change based on the user’s location in a network, while the interface ID can remain static. The static interface ID allows a device with a unique address to maintain a consistent identity despite its location in a network. In IPv4, the limited address space has resulted in a plethora of network address translation devices, which severely limits the possibilities for end-to-end communications. In contrast, the massive address space available in IPv6 will allow virtually any device to be assigned a globally reachable address. This change fosters greater end-to-end communication
abilities between devices with unique IP addresses and can better support the delivery of data-rich content such as voice and video.

Simplifying the IPv6 header promotes flexibility and functionality for two reasons. First, the header size is fixed in IPv6. In the previous version, header sizes could vary, which could slow routing of information. Second, the structure of the header itself has been simplified. While the IPv6 addresses are significantly larger than in IPv4, the header containing the address and other information about the data being transmitted has been simplified. The 14 header fields from IPv4 have been simplified to 8 fields in IPv6. Figure 5 illustrates the differences between the two IP headers, including the various data fields that were eliminated, renamed, or reorganized.

Another benefit of the simplified header is its ability to accommodate new features, or extensions. For example, the next header field provides instructions to the routers transmitting the data across the Internet about how to manage the information. 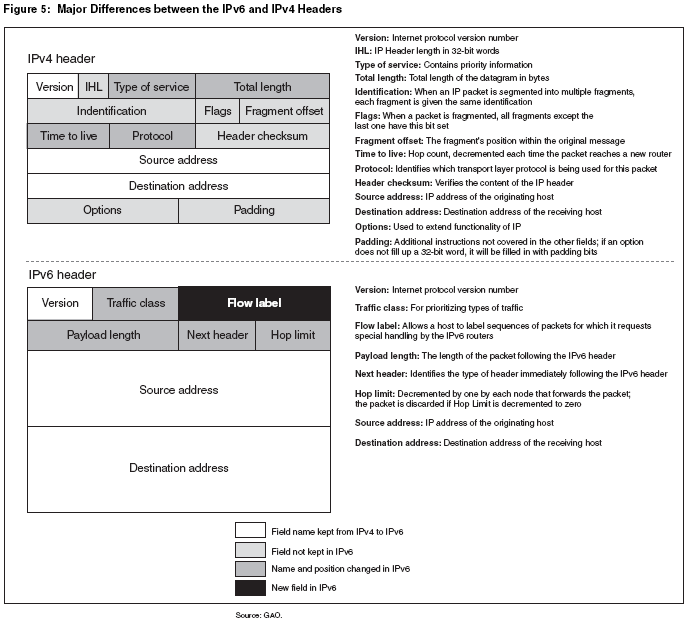 The improved routing, or movement of information from a source to a destination, is more efficient in IPv6 because it incorporates a hierarchal addressing structure and has a simplified header. The large amount of address space allows organizations with large numbers of employees to obtain blocks of contiguous address space. Contiguous address space allows organizations to aggregate addresses under one prefix for identification on the Internet. This structured approach to addressing reduces the amount of information Internet routers must maintain and store and promotes faster routing of data. In addition, as shown in figure 5, IPv6 has a simplified header because of the elimination of six fields from the IPv4 header. The simplified header also contributes to faster routing. -

IPv6 improves mobility features by allowing each device (wired or wireless) to have a unique IP address independent of its current point of attachment to the Internet. As previously discussed, the IPv6 address allows computers and other devices to have a static interface ID. The interface ID does not change as the device transitions among various networks. This enables mobile IPv6 users to move from network to network while keeping the same unique IP address. The ability to maintain a constant IP address while switching networks is cited as a key factor for the success of a number of evolving capabilities, such as evolving telephone technologies, personal digital assistants, laptop computers, and automobiles. -

Stateless configuration occurs automatically for routers and hosts. Another configuration feature—neighbor discovery—enables hosts and routers to determine the address of a neighbor or an adjacent computer or router.

Together, automatic configuration and neighbor discovery help support a plug-and-play Internet deployment for many devices, such as cell phones, wireless devices, and home appliances. These enhancements help reduce the administrative burdens of network administrators by allowing the IPv6- enabled devices to automatically assign themselves IP addresses and find compatible devices with which to communicate.

IPv6’s enhanced quality of service feature can help prioritize the delivery of information. The flow label is a new field in the IPv6 header. This field can contain a label identifying or prioritizing a certain packet flow, such as a video stream or a videoconference, and allows devices on the same path to read the flow label and take appropriate action based on the label. For example, IP audio and video services can be enhanced by the data in the flow label because it ensures that all packets are sent to the appropriate destination without significant delay or disruption.

IP Security—a means of authenticating the sender and encrypting the transmitted data—is better integrated into IPv6 than it was in IPv4. This improved integration, which helps make IP Security easier to use, can help support broader data protection efforts. [But see Bush Slide 12 (it is a myth that IPv6 has better security)] [Underwood ("IPSEC, invented for IPv6 is in every IPv4 implementation")]

IP Security consists of two header extensions that can be used together or separately to improve authentication and confidentiality of data being sent via the Internet. The authentication extension header provides the receiver with greater assurance of who sent the data. The encapsulating security header provides confidentiality to messages using encrypted security payload extension headers.

IPv6’s increased address space, functionality, flexibility, and security help to support more advanced communications and software applications than are thought to be possible with the current version of IP. For example, the ability to assign an IP address to a wide range of devices beyond computers creates many new possibilities for direct communication. While applications that fully exploit IPv6 are still in development, industry experts have identified various federal functions that might benefit from IPv6-enabled applications:

Cost. It is a substantial investment which profit sensitive companies are inclined to put off. [AT&T: New Gen of the IP] [NIST Economic Impact Assessment]

Incentives: As long as there are some IPv4 numbers available, the incentive to migrate to IPv6 is limited.

IPv6 is a new network protocol which will require new training, experience, and implementations. During the transition, new vulnerabilities could be introduced, and IPv4 security devices and software may be of limited use. 1As network operators have done when introducing anything new into networks, operators will have to work with and test IPv6 implementations in order to ensure security. 2

1Michael Warfield, Internet Security Systems, Security Implications of IPv6 (2003) ("IPv6 is not a panacea for security, though, because few security problems derive solely from the IP layer in the network model. For example, IPv6 does not protect against misconfigured servers, poorly designed applications, or poorly protected sites. In addition, IPv6 and IPv6 transitional mechanisms introduce new, not widely understood, tools and techniques that intruders can use to secure unauthorized activity from detection. These IPv6-derived efforts are often successful even against existing IPv4 networks.").

2See Planning Guide/Roadmap Toward IPv6 Adoption within the US Government, The Federal CIO Council Architecture and Infrastructure Committee Technology Infrastructure Subcommittee Federal IPv6 Working Group, p. 34 (May 2009); OECD Study: Economic considerations in the management of IPv4 and in the deployment of IPv6, p. 42 (May 2008).

Networks "will most likely face security challenges throughout the deployment process, including:

"Organizations that are not yet deploying IPv6 globally should implement the following recommendations:

"Organizations that are deploying IPv6 should implement the following recommendations to mitigate IPv6 threats:

The transition to IPv6 creates concerns for law enforcement. During the transition, kludges will be employed by networks in order to conserve addresses and allow networks to keep expanding. These solutions, however, break end-to-end connectively and make it difficult to map specific IP numbers to individual end users. IP numbers may map to carrier grade NAT boxes which may have behind them many households, neighborhoods, or even towns, making it difficult to know to whom an IP address belongs. 10 Law enforcement has also expressed concern that WHOIS 20 for IPv6 contain accurate and useful information. ISPs may incur additional administrative burdens of having to retain records of the dynamic mapping between addresses. 30 There may also be issues with CALEA compliance. The ARIN Government Working Group has been working on these issues. 40