Telephony is an application that has evolved from being the network functionality, indistinguishable from the network itself, to being an application over the network. This unbundling of telephony, placing it in the competitive application services market, has resulted in a significant evolution of policy.

The Public Telephone Network: The public telephone network was born in 1877 when Alexander Graham Bell put his inventions into service and established the Bell Telephone Company. Bell marketed a network service that communicated in real time conversations, known as telephony, over a physical network. The application of telephony and the physical network were bundled and indistinguishable. If you wanted a different messaging application (telegraph, US Mail), you had to use a different communications network. Regulatory policy followed suit, regulating the service provided to the customer which was a bundle of the telephone application and the physical network. Treatment of telephone service as common carriage followed the precedent established of treating telegraphy as common carriage.

The Internet and Unbundling the Network: In the 1960s, computer scientists wanted to rebuild the telephone network to meet the needs of computer communications. ARPANET was designed to take AT&T analogy lines, set up telephone calls that never ended between the computer centers, and enable digital communications between computers (compare this to the Internet of Things hype which describes IoT as a new invention enabling communications between devices instead of between humans). The inventors of the Internet adopted the layered model which separated network functions. The telecommunications service would be separate from the Internet service which would be separate from the applications. As long as the layer above was written to conform to the standards of the layer below, the two could work together without further coordination (this enabled permissionless innovation in the application layer). This created an ecosystem where different layers services were provisioned by different firms. Telecommunications service was provisioned in the 1970s by AT&T, ARPANET was provisioned by DOD ARPA and its grantee universities, and applications were provisioned by end users.

Computer Inquiries: In 1966 the FCC, recognizing the introduction of computers into the telecommunications ecosystem, initiated the Computer Inquiries proceeding to consider how it should approach these computers. This ultimately would become the FCCs Internet policy and was one of the necessary conditions for the success of the U.S. Internet. The FCC was troubled, even back in the 1960s, about whether the telecommunications providers were adequately meeting the needs of the new, innovative, and economically promising computer services. The FCC was also troubled that telecommunications companies were buying computers to run their regulated monopoly telephone services, and then during off peak hours using those same computers to enter the competitive data processing services market.

The FCC in Computer II adopted the Enhanced Services / Telecom Services dichotomy, opaquely adopting the Internets layered model (the FCC had received advice during that time from Paul Baran, ARPANET head Larry Roberts, and ARPA IPTO Chief Lukasik who became the FCCs CTO). The policy objective of the FCC was to ensure an open communications platform upon which innovators could build cool stuff, and to curtain the ability of the market power of the telephone monopoly from distorting the competitive computer market. The FCC implemented its policy by focusing on the service provided to the end user. If the end user received a transmission service which transmitted messages without change in form or content (this was the telephone service bundled with the communications network which had market power), then it was a regulated telecom service. If the end user received any level of interactivity which altered the form or content of the message, this was an unregulated enhanced service (a.k.a. information service). Basic telecom service was regulated for the benefit of the promising enhanced services. Enhanced services were not regulated because the market had low barriers to entry, low risk of monopolization, and low switching costs.

Enter VoIP Computer scientists invented real time bidirectional voice communications over computer networks, otherwise known as telephony. Telephony (a.k.a. VoIP) would be in the application layer of the Internet stack. Telephony would also move from the regulated environment of telecommunications service to the unregulated enhanced services layer of the Computer Inquiries. 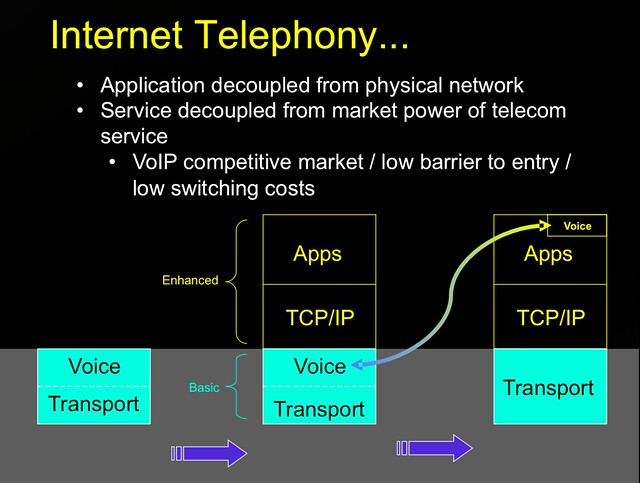 The Policy Consternation: With telephony uncoupled from the market power of the network service provider and now in a competitive market, how should the FCC approach telephony? The FCC confronted a binary option. Either telephony service was a title II regulated telecommunications service or it was an unregulated enhanced service. The Communications Act requires that it be one or the other, but not both and not in between (the 2010 Open Internet rules were struck down exactly because it declared that ISPs were not common carriers but then imposed common carrier obligations on them). But why would the FCC regulate VoIP? The mere fact that a VoIP phone functioned identically to an AT&T phone did not make the policy concerns the same. On the one hand VoIP providers existed in a competitive market; AT&T wireline telephone service did not  there was at that time, and there is still largely today, one (or maybe two) wireline network providers. On the other hand, there are non-economic policy objectives including emergency communications and access by individuals with disabilities.

In 1998, the FCC punted the issue. Confronted with the question of whether the Internet and VoIP was robbing rural states of universal service funds, the FCC concluded in the Stevens Report (1) that the more dial-up internet that people purchased, the more dial-up lines they ordered and the more funds went into universal service coffers, and (2) it was premature to conclude the VoIP should be a regulated telephone service. The FCC created a regulatory holiday for a nascent service, allowing it to gain a foothold in the market and introduce competition. FCC staff did not anticipate that this regulatory holiday would survive for long.

Then bad things began to happen. VoIP providers sold VoIP service as a substitute for regulated telephone service, only it was not. VoIP service in the early 2000s could not place 911 emergency calls. And this was resulting in bad things. 911 calls were being placed that were not going through to the Public Safety Answering Point. State Attorneys General began to file suit against VoIP providers.

In 2005 FCC Chairman Martin for the first time implemented regulation of VoIP providers. Certain VoIP would be required to delivery 911 call traffic to Public Safety Answering Points (PSAPs) (and legislation was soon passed that gave VoIP providers the right to interconnect with PSAPs). But which providers of VoIP service? Microsoft providing telephony service to two dudes playing games on an X-Box? Skype? Vonage? 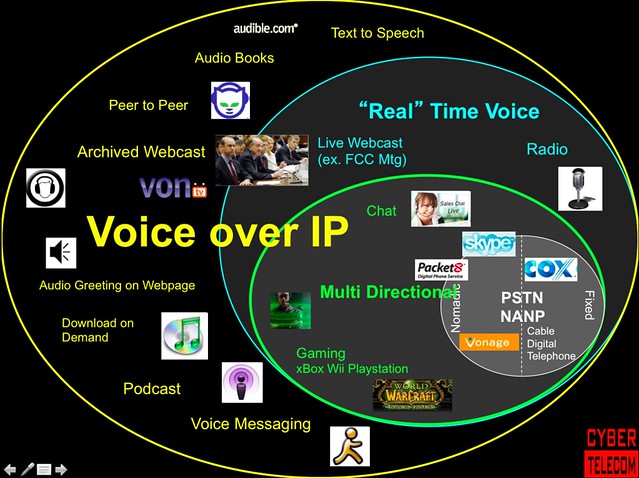 The FCC implemented its new policy by drawing a line between those VoIP providers who offer service using the North American Numbering Plan (regular telephone numbers) and those who do not. VoIP providers who use the North American Numbering Plan, interconnected with the public switch telephone network, and connect calls to public switch telephone network customers fell under this new obligation. These services came to be known as "Interconnected VoIP Providers." 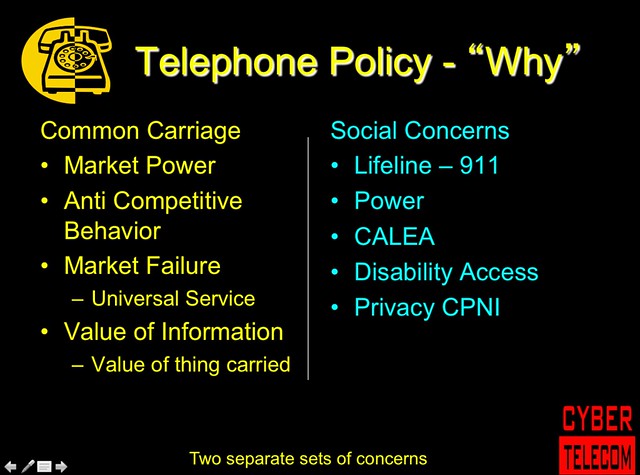 The FCC has been able to successfully maintain this state of limbo, where the status of VoIP providers remains undeclared, but the objectives of certain policies are being achieved. VoIP services have the potential to fall within one of three regulatory classifications: 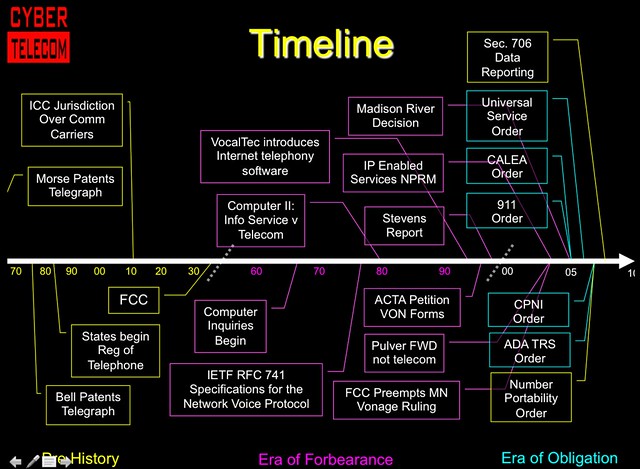