AntiTrust III :: The Break-up of AT&T and the Story of MCI

In the 1960s, AT&T had control over 90% of the telephone access lines (the other 10% of the lines were mostly offered by very small companies providing service to remote markets; for example, a rural telephone coop providing service to a few hundred houses in the mountains). AT&T acquired its equipment from sole provider Western Electric. You could have any color phone as long as it was black and Western Electric. Phones were rented to consumers with large profit margins. There was one long distance network: AT&T. End users could not attach their own equipment to the network. The 1956 Consent Decree prohibited AT&T from entering the information services market or to manufacture equipment for services other than regulated telecommunications.

AT&T had market power. It used its market power to extract monopoly rents in horizontal and vertical markets. It only permitted AT&T / Western Electric equipment to be attached to the network - and it charged high prices and rents for that equipment. It also practiced peak demand pricing, charing high prices for long distance service during peak demand - which was during business hours. This created an arbitrage opportunity, for someone to build a business plan that routed around high network feeds.

MCI was an innovative long distance company that radicalized the telecommunications market. Started in the 1960s, the business plan was to use radio licenses to provide long distance service between Chicago and St. Louis. MCI's application to provide service was approved by the FCC in 1969. But AT&T and the BOCs didn't like this much, and refused to interconnect with MCI. MCI had difficulty negotiating interconnection with AT&T, hired special counsel skilled in negotiations, and brought the issue before the FCC. In 1973, AT&T threw a curveball by filing interconnection tariffs in 49 state PUCs, transforming MCI's transaction costs from one interconnection agreement, to 49 different agreements in each jurisdiction. In 1974, AT&T disconnected MCI.

Frustrated, in 1974, MCI, along with the Department of Justice, filed an antitrust suit against AT&T. On June 13th, 1980, the Court ruled in favor of MCI, awarding MCI $1.8 billion in damages. Two years later, AT&T would negotiate with DOJ the resolution of their antitrust lawsuit, agreeing to the breakup of the Bell System.

The remedy broke AT&T up into (A) AT&T long distance and Western Electric and (2) Seven Baby Bell (BOCs) companies. The created divisions between markets: horizontally it created a division between long distance service and local service. Vertically it created a division between the network and network equipment. In effect, the remedy separated the potentially competitive parts of the market from the non competitive parts, opening the competitive markets up to competition and entrance by rivals. The terms of Consent Decree went into effect Jan. 1, 1984.

Did it work? From Divestiture to the era of the Telecom Act of 1996, the long distance market was active with three major players and several others, annoying people with marketing asking whether they would be interested in changing long distance service. Opening the equipment market also resulted in a growth of equipment manufacturers as well as innovation in devices that could be attached to the network such as fax machines and modems. The BOCs, acting as monopolies in their local markets, basically followed the deterrence policy of Mutually Assured Destruction, and refused to enter each other's markets lest competition erode return on investment (as it did during the telephone era of Dual Service or the telegraph era of Wasteful Competition). It would take the Telecom Act of 1996 and the introduction of mobile telephony to introduce competition into the local market.

Scholars have noted that the legal battle with AT&T cost $10m, whereas construction of the network cost $2m. Sterling, Bernt, Weiss, Shaping American Telecommunications, p.133 (2006) According to lore, MCI had more lawyers than land lines. It became known as "a law firm with an antenna on the roof."

In 2005, one of the Regional Bell Operating Companies,SBC, acquired AT&T Long Distance, and emerged from the ashes as a reborn AT&T.

MCI v. FCC & AT&T, 561 F.2d 365, July 28, 1977 (Court overturns FCC decision re Execunet) "We have today decided that the Commission erred in rejecting MCI's Execunet tariff as unauthorized. The Commission has no general authority to insist that carriers receive its approval before filing tariffs proposing new services or rates. Only if the Commission has determined that the public convenience and necessity may require that new services receive advance approval can it then reject a tariff as unauthorized. In so holding we have not had to consider, and have not considered, whether competition like that posed by Execunet is in the public interest. That will be the question for the Commission to decide should it elect to continue these proceedings. In that eventuality the Commission must be ever mindful that, just as it is not free to create competition for competition's sake, it is not free to propagate monopoly for monopoly's sake. The ultimate test of industry structure in the communications common carrier field must be the public interest, not the private financial interests of those who have until now enjoyed the fruits of de facto monopoly."

June 13, Court rules in favor of MCI in antitrust suit, awarding MCI $1.8B from AT&T 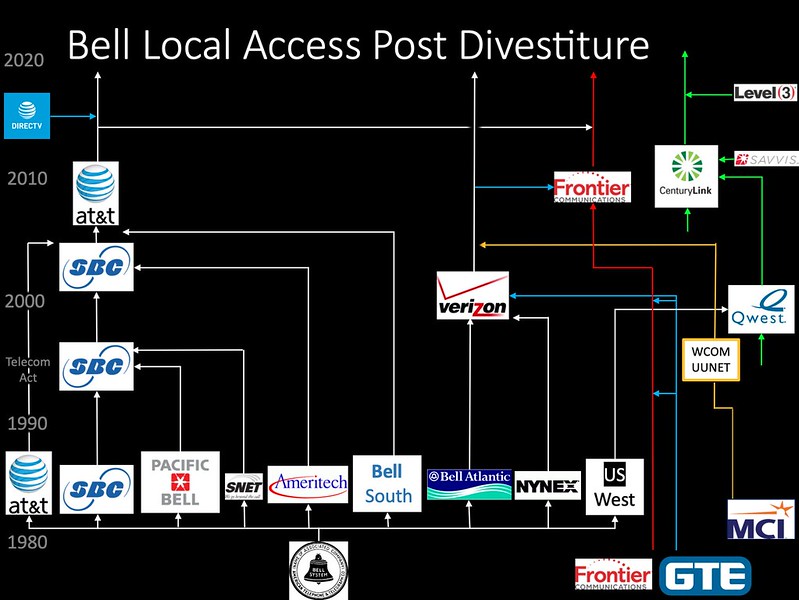 1966: FCC initiates the Computer Inquiries. contemplating the regulatory response to both computers operating the network and computers being operated over the network.

1971: AT&T is offered the opportunity to take over, own and operate ARPANet. "AT&T could have owned the network as a monopoly service, but in the end declined. "They finally concluded that the packet technology was incompatible with the AT&T network," Roberts said." [Wizards p. 232]

1972: AT&T decides not to take over control of the Internet.

1975 "AT&T installs the world's first digital electronic toll switch, the 4ESS®, in Chicago. This switch could handle a much higher volume of calls (initially 350,000 per hour) with greater flexibility and speed than the electromechanical switch it replaced." [AT&T: History: Milestones] [Picture of Control Room of the first 4ESS Switch 1975]

1984 "AT&T reduces long distance rates by 6.4 percent, as non-traffic sensitive costs begin moving from rates to local-company administered access charges. This was the first in a series of rate reductions over the next six years that totaled approximately forty percent." [AT&T: History: Milestones]

2005 acquired by SBC and renamed AT&T

2007: Cingular signs exclusive deal with Apple of the iPhone

2010: FCC Broadband Plan recommends that FCC work on transition of the network from PSTN to IP

2013: FCC releases proceedings addressing the migration from PSTN to IP, and the termination of the PSTN